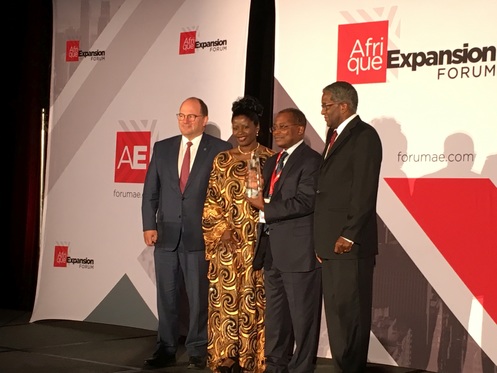 During the 9th edition of the Forum Afrique Expansion held in Montreal, Canada, from 3 to 5 September 2019, Mr. Samuel Dossou-Aworet, the Chairman of Petrolin Group, has been awarded the first African Builder Award. The Prize was handed over to him by the Chairman of the Board of the Canadian Corporate Council on Africa, Mr. Benoit La Salle in front of 300 people from the private and public sector at a dinner organized for the occasion. Mr Dossou-Aworet received the distinguished award for his “important achievements in Africa” over his 40 years activity on the continent.

Mr. Samuel Dossou-Aworet who took part in a panel discussion held during the Forum noted* the importance of Good governance in Africa pointing out that “reforms are spreading across the continent as countries move toward their economic expansion”. Naming the success of Rwanda, Mr. Samuel Dossou-Aworet urged leaders of Africa and international partners to consider the local realities to follow the principles of good governance for a win-win scenario.

The event was created in 2003 and happens every other year. With the high patronage of the prime minister of Canada, the prime minister of Quebec and the mayor of Montreal, this year’s edition is set to be a platform to discuss trade and economy as well as make deals between Canada and Africa.

For more information about the 2019 edition of the Forum, read the press release

In line with its vision for…

Last Petrolin tender for a March…