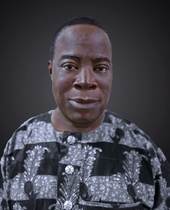 Mr  Lazare Gnonlonfin holds a degree in civil engineering from the Ecole Polytechnique de Montréal, Canada (majoring in hydraulics - 1979 promotion),  and he holds an attestation of specialization in maritime works and port operations from the Ecole Nationale des Ponts et Chaussées (ENPC-PARIS) as well as from the Institut Portuaire d'Enseignement et de Recherche du Havre (IPER) of FRANCE in 1982.

Mr. Gnonlonfin has over 35 years experience in (technical, environmental, economic, and financial) studies as well as in the supervision of civil engineering works, in general, and, in urban, river hydraulics, port and coastal engineering, in particular.

From September 1979 to December 2012, Mr. Gnonlonfin was General Manager of the Autonomous Port of Cotonou and also a consultant on several national and regional projects.  The positions he held in the Autonomous Port of Cotonou from 1979 to 2012, and his consultancy work has enabled him to take an active role in most of the projects implemented in Benin since 1979 as regards port, coastal and urban development and environment, as well as port management and operation.